Ocean Dead Zones are areas of the ocean with very little marine animal life. These areas are often teaming with plant life, often far more than almost anywhere else in the ocean, but the success of that plant life comes at the cost of everything else.

The way Dead Zones form is through a condition called Hypoxia. Hypoxia is when animal life is strangled out of existence by a lack of oxygen in the water, it is this lack of oxygen that makes it rare to see any healthy sealife, or any life at all in these zones. The way this happens is usually the following cycle: This problem can be solved by simple natural processes of course. The wind and the waves will churn up the water, causing it to mix more thoroughly with the air, and thus mixing oxygen into the water, but the problem is that this only works at the surface, it takes some time for oxygen to work its way down the water column through osmosis. This is where the most dangerous part of the dead zones have to be taken into account: the seafloor. Animals like shelled mollusks, worms, and very tiny creatures cannot move quickly enough to escape dead zones when they set in, and will eventually die with extended exposure to a low oxygen environment. Worst of all, in areas with a lot of river run off, the lighter less salty water will sit on the top of the ocean and prevent oxygen mixing, trapping seafloor animals below in a state of long term Hypoxia. Not every low oxygen zone is a complete dead zone though. Some areas, like the Black Sea, have been permanent low oxygen zones for as long as we have been measuring their oxygen levels. Nitrogen and Phosphorous from agricultural runoff are the primary culprits, but sewage and other natural factors play a role in the development of dead zones. 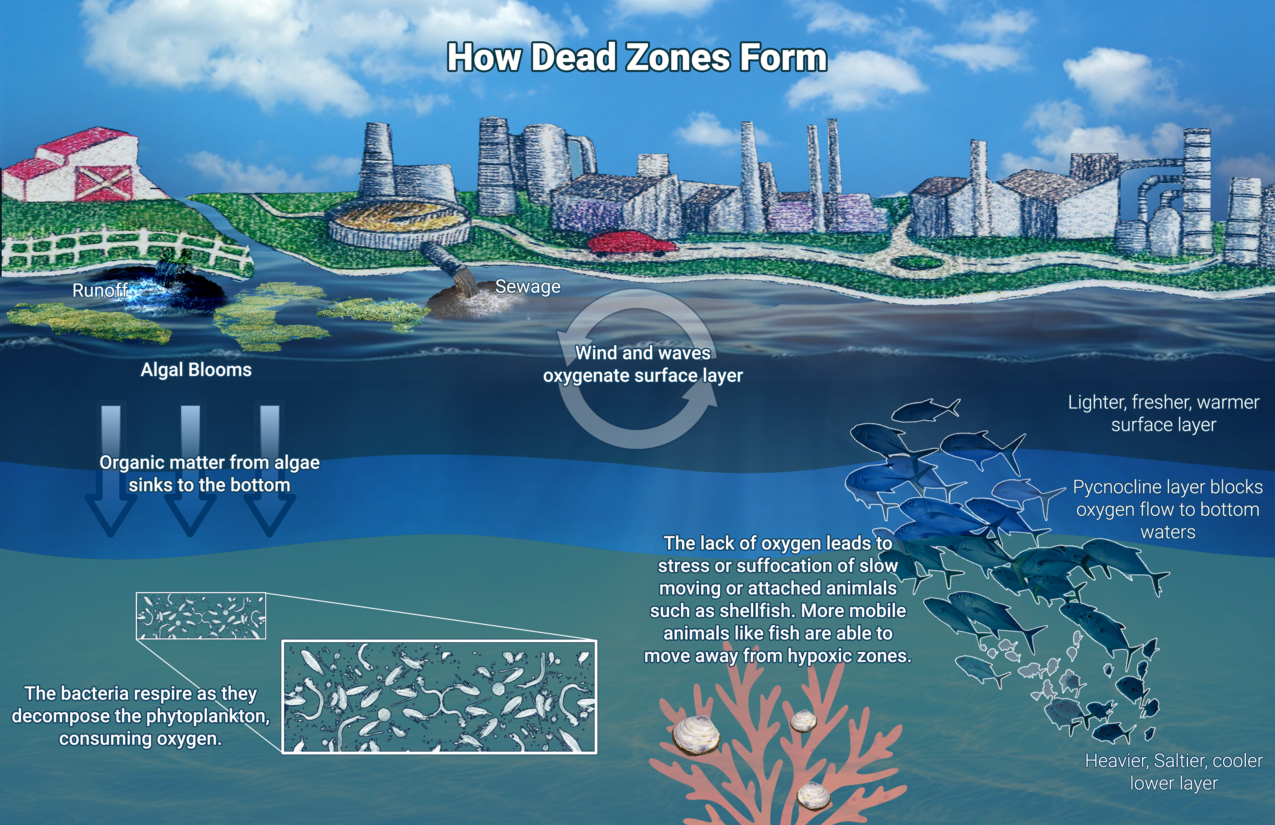 What are some of the ways that we can get rid of ocean dead zones? Well one way is to simply stop using fertilizers or dumping sewage. After the collapse of the Soviet Union in the 1990’s the Black Sea actually ceased to be a low oxygen zone for several years, until the economy came back to life and fertilizers started getting dumped again. This is one solution, but not a desirable one.

Seasteading actually provides several solutions to the problem of ocean dead zones. Firstly, let’s look at a technology that seasteads will use to generate green electricity called OTEC. You can read more about it here. OTEC works by sucking up cool waters from below, mixing it with warm waters above, and then dumping the mixed water back to the depths. When mixing this warm surface water with the waters below, the OTEC system is also mixing oxygen rich surface water, with oxygen poor deep water, and dumping this new oxygen rich water out the bottom. This has the ability to relieve the hypoxia of the deep and encourage re-oxygenation and the end of dead zones in areas where seasteads are built. In addition some have proposed building floating cities which will farm algae for fuel, and placing them at the runoff locations of major rivers. The most infamous U.S. dead zone is an 8,500 square mile swath (about the size of New Jersey) off the Gulf of Mexico, not far from where the nutrient-laden Mississippi River, which drains farms up and down the Midwest, lets out. Building a floating city here would allow these algae farms to produce biofuel using the waste runoff of the Mississippi before it can reach the rest of the Gulf and cause oxygen depletion. This would not only increase the yield of biofuels, but also increase fish populations in the Gulf of Mexico. In theory, seasteads could be placed at the mouths of most major rivers and absorb the pollutants before they reach the open ocean.

Lastly, the final way in which seasteads can help prevent dead zones is by simply not contributing to them. Seasteads are well situated to provide food through aquaculture, not agriculture. A a result, fertilizers needed are at a minimum, and are usually not needed at all. By building out aquacultural food production instead of agricultural, and recycling sewage in the same way that cruise ships do today, we can prevent the conditions from ever arising that lead to ocean dead zones. This can create cleaner oceans, and more fish life for our tables, our aquariums, and our planet. This is one of many ways that seasteading can benefit humanity and our oceans.